Update from a Happy Home 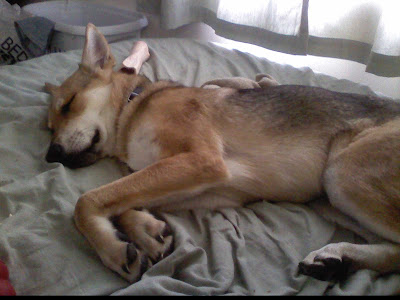 There are never enough happy adoption stories. We love it when an adopter sends a note, an email or pictures. Recently we got an update from Jenn who adopted Venture. Venture was one of those dogs who needed a little extra work, he had had a hard life prior to coming to the League. It was important that his new person understood that it might take some time before Venture was totally at home. Lucky for Venture, he got that person. (Venture is safe and secure snoozing in bed)
...Venture had made himself at home now and is finally settled into the family. He loves to play outside and to go for walks in the neighborhood. I have introduced him to my aunt's white german shepherd, Sitka , and they both seemed to get along/play/interact rather well. Venture still has a tendency to bark at people when they walk past the house or come to the door, but he isnt not as bad as he used to be. He is learning to accept guests when they visit and wants to interact with them, but I am still working with him on that. I am also still working on nail trimming with him....he is a great dog and I am glad that I adopted him! :) I really couldn't ask for a better dog!
Thanks, Jenn, for adopting Venture and letting us at the League know that all is well.
Posted by Debbie Duel at 8:48 AM