Well, unnamed kitty came out from under the desk and is sleeping by my feet.  He is not always by my feet; much of the time he is rubbing my legs, begging for pats, and somersaulting for attention.   His mangled ear may give him the appearance of being a fighter, but he is really a clown cat.  And, a very sick clown cat at that.  This is what I learned about him.  Before coming to the League, he spent two months at another area shelter.  He was surrendered because he was "too old." 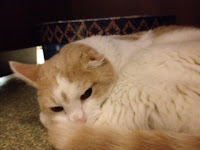 Our shelter director brought him from that shelter to the League, where a veterinarian examined him and heard a very distinct heart murmur.  A blood test was done to find out if the the murmur was an indicator of something worse.  Unfortunately, that is what the test confirmed -- debilitating heart disease

Now, I am noticing that my lovable friend isn't as thick in the haunches as he should be, and  he doesn't jump up on the furniture -- maybe he doesn't want to exert the energy.  His paperwork said that he is at least 9, I'm guessing he is a few years older than that.

Unnamed and under my feet, this is one sweet, albeit sick, marshmellow cat.
Posted by Debbie Duel at 10:30 AM No comments:

The View from Under My Desk

I walked into the cat room on Saturday and fell madly in love with this big bruiser.  You can't see all of him in the picture, but by the size of his ginormous head you can guess that he is not a petite little thing.  This mellow, street-wise tom cat, obviously lost his share of fights.  His left ear is nothing but a stub and he tends to find a safe spot, like under the desk, to chill and observe.   But, give him your balled up fist and he is all over it --  nudging away.  He likes belly rubs, too.  Not a very cat-like behavior.  He came to the League without a name, so for right now he has been dubbed "the Dude" but I certainly think he needs a much more classy, hunk-like name.  He's blond like Brad Pitt, but way cooler;  more George Clooney-like in the debonair department.   Humphrey was suggested, maybe like the former senator -- Hubert --or the iconic film star -- Bogart.
For right now, I call him kitty and buddy, and am enjoying having a temporary office-mate.
Posted by Debbie Duel at 7:37 AM No comments:

School started in many area schools last week, and it starts in my neighborhood on Monday, so I was planning to write about the importance of not approaching stray animals on your way to school.  And, if your dog accompanies you to the bus stop, make sure that your dog is properly leashed and doesn't bother kids who may not want Rover licking them or jumping up on their clean school clothes.  BUT, I have to run just one more camp post.   We heard from an adopter who adopted one of the pups from our training camp.  Gaga, who was Luke and Eli's pup for the week, has a new name and a loving forever home.

It's impossible for me to describe all the ways that she brings me joy -- even when I get up in the early hours of the morning! I decided on a name for the little gal yesterday -- "Mari". She's an incredibly social puppy -- she loves people and other dogs and that got me thinking that she's a bit of a social butterfly. The Spanish word for butterfly is "mariposa" and I thought Mari was a novel enough name for her and short enough that she'd easily recognize it.
Thank you for everything -- Mari is a great puppy and I couldn't be happier to have her in my life.

What a perfect way to end summer break.

Posted by Debbie Duel at 9:23 AM No comments:

﻿
﻿﻿﻿
﻿Some area students started school a couple of weeks ago; others went back today.  Most local students return to school next Monday.   Before I start planning for a busy school year, I decided to make the summer last a little bit longer by spending time today enjoying the many photographs taken during our three sessions of Caring Kids Camp -- All About Animals, Animals & Art, and T-3- Training, Tips, and Treats.   In all three sessions I was thrilled to see returning campers; plus I met delightful new friends who I hope to see next year, if not before.   Because camps were filled to capacity, with waiting lists that never moved, we will add a fourth week in 2013.  Information about four weeks of Caring Kids Camp will be posted on the blog and the League's website, warl.org, in early February. To see more photos click on the pictures on the right-haand side of the page under Dr. Hughes' Friendship Tales.

Posted by Debbie Duel at 7:33 AM No comments:

All Dressed Up in Puppy Training 101

This is the final session of Caring Kids Camp, summer 2012.  Ten campers are working hard to teach five 7-week-old pups the beginnings of good manners in  T3--Training, Treats & Tips.  Part of the pups training is learning that people with hats, scarves, glasses, costumes, and other, potentially our of the ordinary, accessories are not to be feared.  All dressed up, Sophia and Allegra train Gary, their ward for the week, how to sit, touch a target and lie down.   Gary is star pupil when it comes to crate training.   He often prefers napping in his crate during class time.  Before he conks out for aa cat nap, he shows his teachers that, "Yes, I can touch your hand -- before I snooze -- when the reward is a yummy treat!"
Posted by Debbie Duel at 6:55 AM No comments: