Contributing to WARL is a Congregation Affair 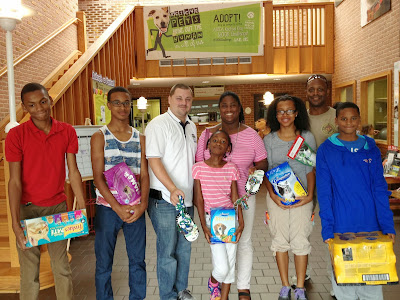 When students in St John's Episcopal Church's  youth group decided to help the animals they were asked by Music Minister Adam Graham if they wanted to organize a drive to stock the League's Rescuers' Food Bank or  collect linens, treats and toys for the shelter animals --  they decided to do it all.  Church services during the summer included a student appeal requesting donations for The Furry Family Drive.  The congregants complied.  On Saturday, September 21st, Music Minister Adam Graham, student representatives, and parents packed two cars with bags of linens and an assortment of toys, treats and food.  On top of that, they presented the League with a $200 check to help provide animal care.   And, that's not the end of their effort.  The group is exploring additional ways to help the animals, including possibly scheduling an adoption event at the church.  Music Minister Adam Graham is a  good advertisement for adopting a shelter dog; his beloved Bella was a WARL adoptee 4 years ago.  THANK YOU ST. JOHN'S EPISCOPAL CHURCH families for helping your furry friends at the Washington Animal Rescue League.
Posted by Debbie Duel at 7:38 AM No comments:

A Donny and Jules Update 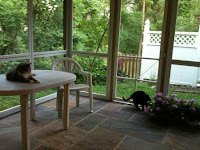 Wow!  It's been  awhile since Donny & Jules moved from my  office to their forever home.   Their well-trained guardian  reports that the dynamic duo are just dandy and enjoying these pleasant pre-autumn days on their "catio".   That was NOT a spelling error, a  screened-in patio, inhabited by cats, is naturally a catio!    I opened  the picture of  Donny lounging on the table and Jules investigating a porch-plant, and wondered if it would be presumptuous of  me to invite myself for an afternoon tea visit.  In my book it doesn't get any better than hanging out with two laid-back cats on a securely screened catio,  sipping tea and munching chocolate chip cookies.  "Hello, Donny & Jules' perfect person, what are you doing this afternoon?"

Friday the 13th, often considered bad luck, only happens twice a year.  Black cats, almost always available for adoption in animal shelters, are  considered bad luck in some cultures.  But, did you know, that --
I've been lucky to share my home over the years with two black cats.  Sidney, my very first cat, convinced me that black cats brought neither good luck nor bad,  but provided endless hours of entertainment.  She loved to retrieve (unlike Nigel, my Labrador RETRIEVER).  Her bad luck was personal, she suffered from a fatal brain tumor when she was not quite 10-years-old.  Gladys, my second black cat,  started out with bad luck of her own ---scraggly, and barely a year-old, she was reportedly chased up a telephone pole by a teeth-barring dog and stayed there for more than a day until she was rescued by an animal control officer.   She came to live with me as a foster and reigned as queen of her castle for nearly 18 years.  I was lucky to have been loved by them both.
Posted by Debbie Duel at 8:18 AM No comments:

I Love to Draw Dogs! 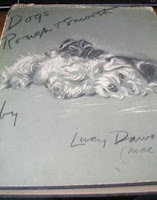 Jennifer Lipsey's book, I Love to Draw Dogs!  will turn even the most crayon-phobic, stick person creator into the next Lucy Dawson.  Who is Lucy Dawson you may ask?  Ms. Dawson illustrated the book, Dogs As I See Them in 1936.  Her dog illustrations were popular in England and the United States.  The sketches are now considered collectible art.  Perhaps young artists,  who follow Jennifer Lipsey's dog drawing instructions to create little dogs, big dogs and "even skating dogs", will one day have their works in the collections of dog lovers everywhere!

Labels: Dogs As I See Them, I Love to Draw Dogs, Jennifer Lipsey, Lucy Dawson

Hurrah!  We heard back today from one our camp puppies' forever guardian.   She wrote,
Thank you for your letters about Brandy, I was so happy to read about the pup's early training and glad to learn he had such great teachers.

I changed the pup's name, as both of you suggested, and he now goes by "District." He loves to take early morning long walks.
I am very lucky to live right across from where I work so we get to see each other for lunch. He is doing very well with his crate training and has almost mastered the come, sit, down and stay commands. He likes to romp around in the dog park but he often gets muddy so I have to wash his paws in the tub (see pic)!
In the afternoons we like to walk down to the waterfront where we see a lot other pups and humans.
Thank you again for your letters and I hope you like the pictures!
What a nice September morning email.  I'm sure District's trainers will be thrilled with the update.  Hope we hear an equally favorable report from this lucky guy's brothers and sister.
Posted by Debbie Duel at 10:40 AM No comments: