Author and illustrator Carla Golembe shares her home with two cats, Zippy and Zoe. When Zippy was a year and half, Carla realized, that as much as he loved Carla, Zippy would be happier if he had a cat friend, too. So, in 1999 Carla visited the Washington Animal Rescue League, and that's where she fell in love with Zoe.

Carla recently shared their story with me and I am happy to share it with you.

Marq in the cat room introduced us to several kittens who were cute and nice but they didn't really connect with us. Then he told us he had a kitten who was a little bit older but a real sweetheart. He brought Zoe over...she was named "Sink" at the time. She was 6 months old and had been left at WARL at the age of 3 months. I took her in my arms and she looked right into my eyes and reached her paw out and stroked my face! We fell in love.
When we brought her home Zippy took one look at her and ran to his litter box and threw himself on top of it spreading all 4 legs out as if to say "I'm not sharing with you". But within a month they became great pals.Zoe has lived with us for 10 years. 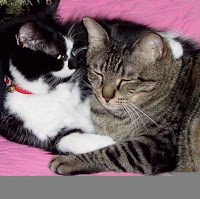 Five years ago we all moved to Florida, Zippy and Zoe didn't like their ride from DC to Florida in the car and they meowed and howled the whole 1000 mile ride. But they love living here. They are indoor cats but spend time on our screen porch where they see lots of birds and lizards and enjoy the fresh air. They have been featured in a lot of my artwork including the "Zippy and Zoe" series...a group of 6 picture books published in Taiwan.
Best Budies -- Zoe (Black and White) and Zippy (Brown Tabby) 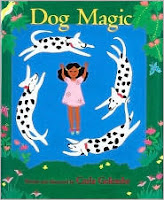 When my daughter, Natalie was younger (she's now 16), I often read Dog Magic and Annabelle's Big Move to her. Carla wrote and illustrated those books and has written and illustrated many other books, too. To learn more about Carla and her many roles as artist, illustrator, writer and teacher visit http://www.carlagolembe.com/