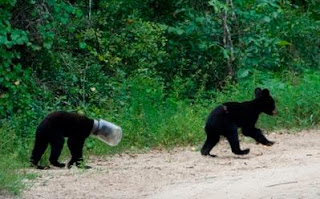 Cathy Connolly's  Associated Press picture of a black bear cub with a plastic container stuck on his head reminds us that our actions can negatively impact others, including  wildlife.  The accompanying article read,  "The clear plastic container was removed from the 6-month-old cub's head after being stuck for at least 10 days. The cub poked its head into the jar when digging through trash in a neighborhood in central Florida. Biologists say the cub was days away from death because the jar made it impossible to eat or drink. The team had to tranquilize the mother bear and then grab the cub to remove the jar from the bear's head."  It's really amazing  that the cub survived.
Posted by Debbie Duel at 6:59 PM