For more than 40 days oil has been spewing (I'm actually in need of a much stronger word -- suggestions?) into the Gulf. In today's Washington Post officials from BP Oil Company and from the administration say that it is possible that the oil will continue to spill (need a stronger word here too) into the water until AUGUST!!!!!! That's four months since the explosion, four month since 11 people were killed, four months since birds, mammals, sea creatures and vegetation were contaminated and starting dying off. It's just way too long. We keep hearing that they are trying to stop the spill -- the "top Kill" (whoever heard of top kill before this disaster?) failed, other attempts have failed and now we are told that the oil may not be contained until AUGUST!!!!, it's just not right.
This is one of those situations where it is easy to feel helpless, BUT every one of us can write a letter, let your representatives know that something must be done sooner. Write to President Obama. He mentioned that his daughter asked, "Did you fix the hole?" Let him know that, like Malia, you are worried that the environment will not be able to bounce back from this enormous disaster.
On another 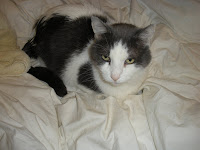 matter that I feel equally powerless to control is Bruce. He came home from the hospital on Friday, had a great night, a good Saturday, an okay Sunday and a miserable Monday. He came back to the hospital today. Right now it seems like I can't do much but watch him, offer him food, make sure he's comfortable and drive him to and from the hospital. Bruce has a wonderful medical team caring for him. At this very moment its beginning to look like even they, fabulous as they are, may not be able to help him. The picture to the left is of Brucie chilling in my office after getting fluids. I am grateful to Dr. Rosen for taking my call as she was to board a plane for home. She listened to the update and instructed me on what could be done for Bruce today. I am indebted to three members of the incredible medical center staff, Evelyn, Kira and Maria for administering fluids today, Memorial Day.
Once again, shelter and medical center staff are here when others are enjoying a holiday. Bruce and I (well, probably just me) are extemely grateful.
Posted by Debbie Duel at 8:59 AM