UPDATE!! Little Flynn, the kitten who was almost forced roadkill because of a couple of uncaring teens who tried tossing him into a busy street, is happy in his forever home. Less than 3 months old, Flynn has been rescued at least twice in his short life. Once, when a passerby "bought" him for $20 from the uncaring teens, and most recently by his forever family. Soon after Flynn came to the League, a couple interested in adopting two kittens, encountered a teeny gray and white problem. Lit 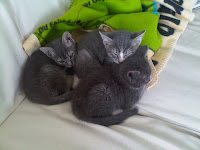 Could they be separated? Yes. Would the League let the couple adopt all three kittens? YES!!
Within hours we received our first update complete with happy home photos. Cooper, Izzy and Flynn are snoozing in their new home, can you pick out Flynn?
Posted by Debbie Duel at 9:52 AM