A Very Happy New Year to All!

This is a very happy time for many WARL alums, including three very recent adoptees.   I was thrilled to learn this morning that Sailor (pretty white cat) and Skipper (Sailor's very best friend) moved into  their forever home over the weekend.   Sailor is an outgoing fellow, but his timid friend, Skipper, rarely peeked her head out of the hidey-hole in the cat tree.  No one worried about Sailor, he is a cat with an abundance of personality.  But Skipper, though gorgeous, could rarely be seen. When their new person came to the League looking for a pair, Sailor must have known this was it -- he persuaded Skipper to come out for a quick introduction, and the rest, as they say, is history.  Their adoption was Skipper's holiday miracle.

More good news.  Judy, a rather round and extremely lovable cat had been a staff favorite for some time.   People were drawn to Judy because of her size, but no one applied to adopt her -- until this weekend.  Judy is starting out 2013 with a family of her own.   We hope that they will keep us posted on the weight loss program that Judy started while living at the League.   Four months ago, Judy tipped the scale at 24 pounds.  By her adoption day she had slimmed down to 22 pounds. 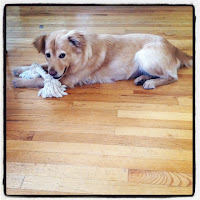 And, what a treat to read about Carnival and see the picture of her at home with a huge rope toy of her very own.  Pretty Carnival came to League as part of a terrible hoarding case.  She was very protective of her newborn litter.  The pups were outgoing, and people-centered.  But Carnival remained fearful of people and came back to the shelter where she stayed for months.  Even though staff and volunteers worked with her, she remained hesitant. That all changed shortly after she moved into her forever home.  She is doing great - I hardly recognize her as the scared dog at the shelter, wrote a friend of Carnival's guardian.

Skipper, Sailor, Judy and Carnival were among the  1,713 dogs and cats who left the League for permanent, loving forever homes in 2012.  Happy New Year!
Posted by Debbie Duel at 10:54 AM