Inside yesterday's Washington Post was an article detailing a heroic whale rescue. The young calf -- one of less than 400 remaining North Atlantic right whales -- became entangled in fishing lines off the coast of northern Florida during its annual migration along the Eastern seaboard. Folks from six Florida and Georgia institutions worked for three days to free the whale; Rescuers in three boats cut about 350 feet of fishing line that was trailing the whale. According to the article, they did not pull the fishing lines out of the whale's mouth because doing so could harm the animal. The rescue team determined later, from the air, that the whale was free of the line. The rescue was a success!
Shortly after reading the Washington Post article, I was involved in an animal rescue of my own. I am watching my friend's cat for a couple of days and expected it would be a simple task -- feed the cat, change her water, scoop the litter pan and play with her. I did not expect that I would have to catch a wild bird inside my friend's house, but that is exactly what I did.
I was getting ready to lock up when I heard a strange noise coming from a bedroomthe. There, pounding the window -- from the inside -- was a teeny, tiny frantic bird. "What is a bird doing here!" I made sure that the cat was not in the bedroom and closed the door. It was just me and the bird. I tried opening the window, but wasn't sure how it opened and I couldn't get it to budge. I tried throwing a blanket on the bird, but it was so little and so fast, it escaped. I did that several times. Then I got a box and tried to scoop the bird in the box, but it was too fast for the old scoop-bird-in-box trick.
Frustrated, I left the room, made sure the door was closed tight so the cat couldn't get in, and called Second Chance Wildlife Center (www.scwc.org). They know everything there is to know about urban wildlife. The person I spoke to advised me to leave crumbled cat food soaked in water and try again to trap the bird with a sheet or piece of cloth or call animal control and ask for help.
I decided to get a partner -- teamwork is always best -- and came back with my son, Max. We said hello to the cat and went to the bedroom. The bird was back on the window, trying desperately to flap its way through the glass. After several attempts of tossing a blanket and failing to catch the bird, we waited patiently while it settled back on the window. Finally, we were able to corner the bird and get him into the box.
We took 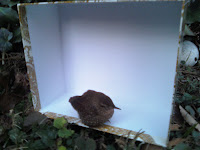 the closed box into the backyard, set it on the ground and opened the lid. At first the bird didn't do anything. He seemed to be thinking "what should I do now" -- he'd spent so much time trying to get outside and now there he was. I tilted the box and the bird hopped out and burrowed in the ivy. I thought maybe after all that pounding he was hurt and we'd have to find him in the ground cover, scoop him up and take him to the Second Chance Wildlife Center. And then, he flew away. The rescue was a success!
Posted by Debbie Duel at 7:07 AM