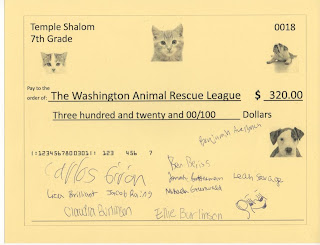 ﻿﻿
﻿﻿﻿﻿﻿﻿﻿﻿﻿﻿﻿﻿﻿﻿﻿﻿The $320 that Temple Shalom's 7th grade class raised represents, not only weeks of bake sales, but lots of  research, information sharing and debate.   The religious school students collectively chose one organization for their mitzvah ( good deed) project; but before the League was named the award recipient, the passionate pre-bat and  -bar mitzvah students appealed to one another to support a variety of community organizations.   Once the League was identified as the class mitzvah project,  the organizing, collecting and baking began.    The students baked and hosted weekly bake sales and set up a collection box in the  temple's lobby for donated cat and dog food, treats and linens.  Students appealed to congregants, during Friday night services, to contribute to the class' effort.   A number of the 7th graders and their parents visited the League earlier this month to bring the donations and visit the animals.   Roxanne P., a loyal WARL volunteer, guided  the group through the shelter and introduced them to the shelter animals.   The students asked numerous questions, many about volunteering -- undoubtedly this concerted effort to help the animals will not end with the 7th grade project !﻿﻿﻿﻿
﻿﻿
﻿
﻿
Posted by Debbie Duel at 8:38 AM